Sustainable and Business Benefits of Additive Manufacturing in Production

The physical fabrication of a 3D object resulting in layered materials stacked together is the basis of additive manufacturing. The process is based on only using the amount of material needed, eliminating production waste. In its early years, this process was mainly used for rapid prototyping, but not mass production. Today, 3D printing is the basis for producing thousands of different products, but still more for short runs.

Additive manufacturing, which is dominated by 3D printing to the point the terms are used interchangeably, has been steadily growing among global producers throughout this century. The market size in terms of U.S. dollars has grown from $4.4 billion in 2013 to $21 billion in 2021, according to Citi Research. Keep in mind the industry only had four major companies in 2000 but now has over 170 different players.

The concept of AM provides a viable solution to cutting production waste that has been traditionally sent to landfills. The buildup of pollutants in landfills elevates the risk of these harmful toxins seeping back into ground water. In recent years, companies have increasingly turned to recyclers to dispose of toxic waste or they've figured out how to repurpose items. With a 3D printer, you can actually make products that generate zero waste while significantly lowering production costs.

A proliferation of 3D printers is emerging in the 2020s. An early type of additive manufacturing for production in the eighties was based on stereolithography (SLA). This method uses liquid resin as the basis for machine parts and prototypes. Early experiments commonly yielded brittle products, but today's 3D printed products are more flexible and durable.

In 1989 came the introduction of fused deposition modeling (FDM), which pushes melted material through a nozzle to create layers of filament. Today the two main categories of 3D printers are the cheaper more common FDM machines for making consumer products and the more advanced SLA printers. Here are some of today's options for 3D printing in production.

This process is similar to polymer part production, converting liquid resin into finished products. The difference is this method is capable of generating an entire layer at once.

Additive manufacturing options to consider for producing metal products include binder jetting, power bed fusion (PBF) and wire or metal powder solutions. With metal, you'll need to take the extra step of post-print machining for most 3D printers. Binder jetting is a process that applies glue to metal powder as it transforms into dense metal.

Many young entrepreneurs and hobbyists are attracted to participating in open-source 3D printing, in which individuals design their own cost-efficient printers. By 2007 industry leader 3D Systems offered a commercial kit to build a 3D printer for under $10,000. 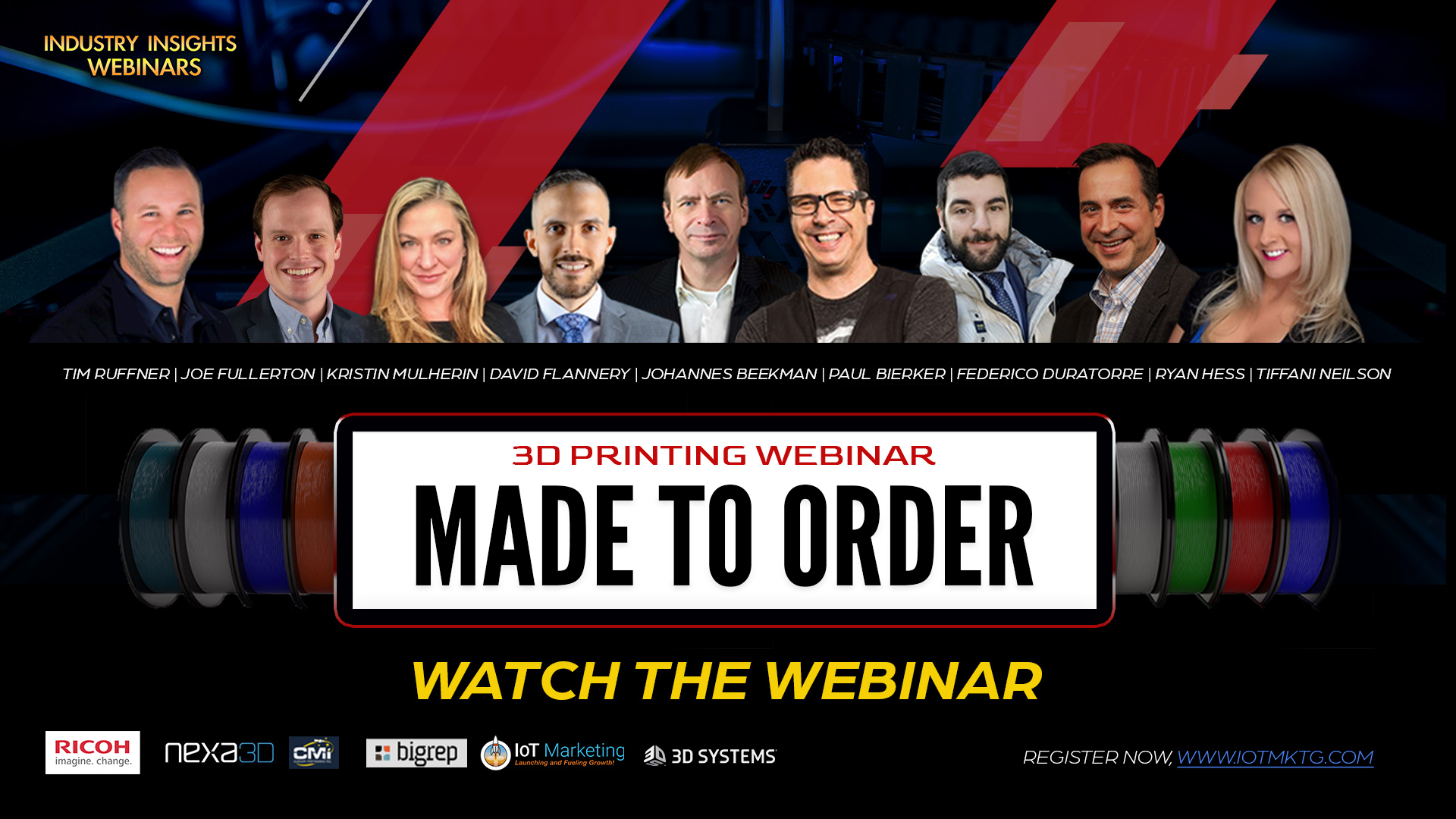 Watch the recording of our "Made to Order" webinar to hear from industry experts on a wide scope of topics on the latest trends and challenges surrounding 3D printing technology, with predictions and tips for those new to or experienced in 3D printing and additive manufacturing.

Designing a prototype or product begins with a software application such as AutoCAD. This software lets you create a 3D digital model that is then sliced into multiple layers as the model is written in machine code. The 3D printer reads this "G-Code" for producing a physical object.

The most commonly used material in additive manufacturing is ABS plastic because it's soft and can be easily manipulated into any shape. At the same time, it's a durable material. There are various other materials used as filaments in 3D printers such as metal and nylon.

One of the common components in an SLA printer is a light source such as a laser that shines through and heats resin to transform it from a liquid into a solid. The laser precisely cures and hardens areas of resin to form a solid layer.

An FDM printer houses a gun that applies hot glue, based on the programmed design. A motor powers the gun to feed the filament through the heated nozzle as it creates a plastic layer. The gun is designed to move on an X, Y and Z axis to create the proper shape. It's instructed by the computer to apply glue at specific coordinates. The machine uses the glue to draw the design one layer at a time.

The 3D printing industry has been initially embraced by industrial producers in the automotive, aerospace, utilities, tech and construction industries. The medical industry has also played a giant role in AM development in the form of equipment, instruments, prosthetics and implants.

Even food producers have gotten involved with additive manufacturing by printing food. Instead of using plastic for the material, 3D printed food is made from edible materials. These items are created with layers, similar to making a pizza. The materials typically start out in liquid or powder form as multiple ingredients are added. One layer might encompass protein, while another consists of vitamins.

The 2030 revenue forecast for 3D printing, according to Grand View Research, is $76.16 billion, which represents 20.8 percent growth from 2022 levels. The metal segment currently accounts for half of revenue from 3D printed products, while polymer is the next largest revenue-generating segment. A future segment to watch for is ceramic, which is poised for significant growth.

The most practical and productive place for a 3D printer is a manufacturing facility. But these machines are also still very useful for their original purpose of rapid prototyping. Prior to 3D printers, an inventor could spend enormous amounts of time, money and energy on just making and refining different prototypes until arriving at a finished product for commercial use. A 3D printer cuts these costs and makes it easy to edit your model quickly.

In many ways, additive manufacturing is the best solution so far for customizing one-off products, which can be made from multiple materials. Today the maximum number of materials a 3D printer could use to make a product is over a dozen, but certain materials such as paper, wood and rocks are not suitable for 3D printing.

Identifying mistakes quickly in prototypes is part of advancing a product to the next level. A 3D printer can be integrated with machine learning technology for making automated quality control decisions. Just imagine how much time, money and labor this feature alone can save.

MIT startup Inkbit is a pioneer in this technology, designing a precision 3D printer that stores digital replicas of end products. It has developed an AI-based automation system that can instantly correct errors in the production process. Some of the companies Inkbit has made 3D printers for include Amgen, Johnson & Johnson, Novartis and Lockheed Martin.

Investing in a Quality 3D Printer

One of the key issues you should know about when you shop for a 3D printer is that just because these machines are expensive doesn't guarantee they'll do what you expect. Some machines are light-sensitive with low accuracy and other limitations. Certain 3D printers are good for high speed but underperform in other areas. Some machines are more durable than others.

First you need to decide how you're going to use the machine then determine which model best fits your budget and your needs. Is it just for prototyping or do you want to distribute a product? Be sure to look for video reviews of the machines on your wish list.

The most advanced 3D printers can make highly detailed products at a fraction of the cost compared with traditional manufacturing processes. Some products that might normally cost $10 to make can be produced for a dollar per unit. Although additive manufacturing technologies are still not practical for high-volume production on large heavy items, certain small items such as machine parts can be mass produced efficiently.

The reason interest is growing among producers in additive manufacturing is that it provides multiple sustainable and profitable solutions. It reduces waste, cuts costs, allows for customization and can accelerate turnaround time.